In a city full of creative millennials, spaces for networking are very important. When I moved back to Detroit full-time after undergrad, I set a goal to attend as many networking events as possible to connect with other professionals, bloggers, and community leaders.

Let me just say, networking events can be a bore! I often found myself in spaces where no one resembled me, everyone was well off in their careers, or the experiences lacked organic connections. I began to wonder how I could do my part in the city by changing this and The Millennial Winedown was created!

I hosted my first winedown as I launched Millennial Meets Stove, a networking event with a young and refreshing atmosphere, delicious food, live music, and unlimited wine. How could you beat that? I was inspired by the small gatherings my friends would have on the campus of Ferris State and how comfortable we were with meeting new students of color on campus and celebrating our successes.

It was amazing to see how comfortable millennials were with sharing social media platforms and business cards, dancing with complete strangers and connecting with influencers who they may follow on social media but have never met. The first event was such a success, I knew Detroit needed more experiences like this.

This month, I hosted my first sold out winedown and wanted to share pictures from the event taken by Cyrus Tetteh.

Thank you so much for your continued support and I hope to see you at an event in 2019!

This site uses Akismet to reduce spam. Learn how your comment data is processed. 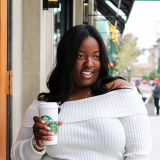